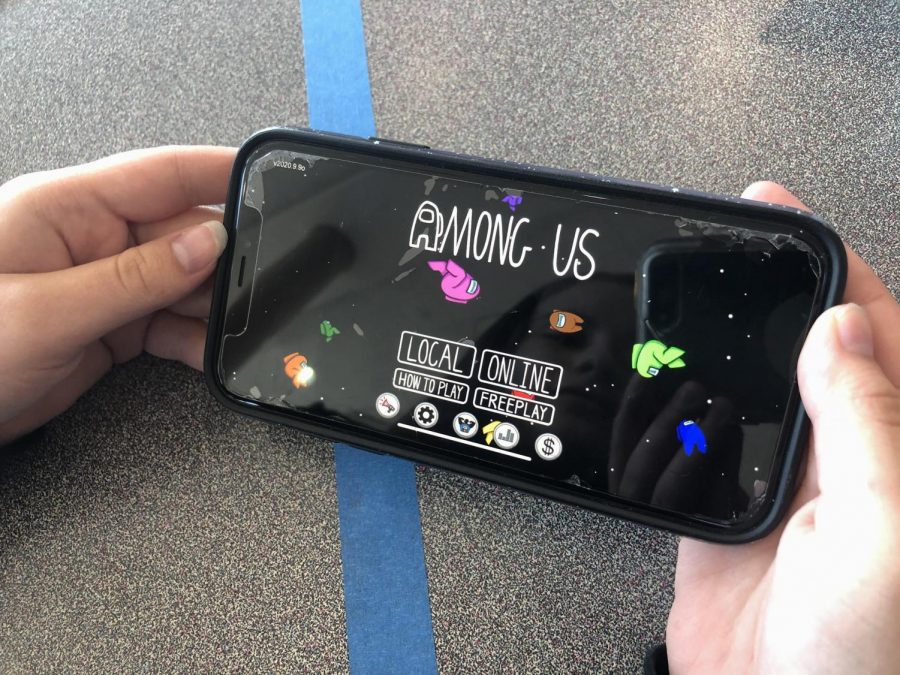 ROUND ONE. Students play a round of Among Us during their lunch periods. “[The game] is a great start to a conversation even if you’re nervous because it's so fun and so many people play it,” said Ulises Gonzalez (10).

When most people hear the word “gaming,” they think of some sort of complex and overwhelming game that can only be played by those with certain skills, but in recent weeks, there has been one game that has brought new meaning to the word “gaming.” It’s called “Among Us.” The newly popular game can be played on almost any device. The game consists of anywhere from 4-10 players where each player is assigned a role of either “Crewmate” or “Imposter” and depending on your role, you have to do certain tasks. The goal of the crewmates is to find the imposter and the goal of the imposter is to not get caught. As far as preference goesn, everyone is different.

“I like the adrenaline rush of being imposter because there’s always a risk of being caught when you’re attempting to remove a player from the game,” said Micaya Koenig (11).  “but I also enjoy being a crewmate and trying to collectively figure out who the imposter is.” One of the best parts about the game is getting to play with friends. Many players will talk on the phone with others while playing the game to better communicate. “Among Us” has also been successful in helping people meet others without having to work about them knowing their identity.

“Because of the game, a lot of people I was never really that close with started talking to me more which is really great because covid has taken away a lot of the other things I would be talking about like sports or homecoming,” said Ulises Gonzalez (10). For most people, staying social during a pandemic isn’t easy. Most kids only go to school twice a week and even then they have to keep a distance, but “Among Us” has made it easier to socialize with people despite new limitations.The game, however, has more than just social life benefits.

“By playing ‘Among Us’ we can help our critical thinking and problem solving skills. We have to be constantly aware of what is going on and consider the thoughts of others while remaining skeptical,” said Hunter Shykind (10). A common misconception about video games is that they make individuals lazy and even unintelligent. “Among Us” is one of the many games that reverse this stereotype by encouraging its players to think critically.

Everyone is different, so some people might not want to play “Among Us”, but either way, it is evident that the newly popular game has been very successful in appealing to people of all different backgrounds and social groups. The main hope of the game is to bring people together in a fun way during this difficult and dividing time, and from the way it appears, “Among Us” has done just that.