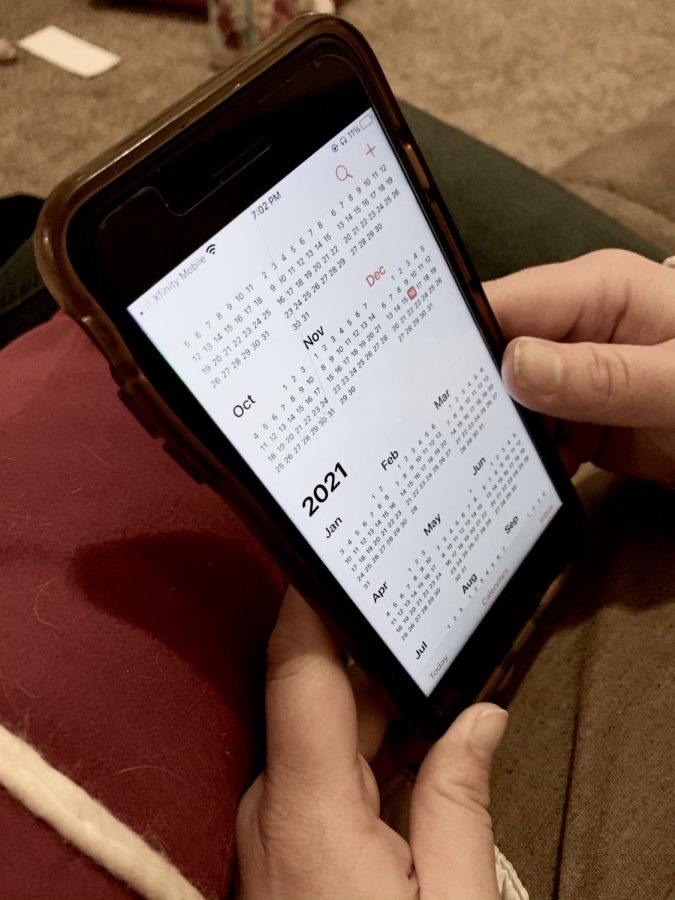 TICK TOCK. As the days countdown to 2021, people across the globe reflect on the past year in hopes that 2021 will be different. “I’m mostly excited for a fresh start,” said Ashley Raugust (10).

Imagine yourself on a roller coaster. You’re strapped into the ride ready to go and then, suddenly you feel the ride start to move. It’s slow at first as it gets to the top of the slope and then, before you know it, you’re screaming at the top off your lungs as the coaster goes down at a speed you never thought possible. But that’s not the end, because before you even have a chance to catch your breath, the top of another hill approaches and you are once again falling. Now repeat this process five or six more times. This is what the year 2020 has been like. But now, the year is coming to an end and it is time to stop and reflect on the past year as we go into 2021. So let’s do that.

This was the start of talk about 2020. Like any other year, people were excited for a fresh start as they counted down the days to 2020.

“Going into 2020, I was excited for school because I knew what I was doing more and I was really motivated to do well,” said Ashley Raugust (10). “The new year was something I looked forward to because I was ready to hang out with my friends and build relationships…”

The year started with the assasination of Quasem Soleimani, a valued Iranian general. The assasination and it’s retaliations sparked fears about a possible war between the United States and Iran. This also led to conversations about including women in future drafts which sparked controversy among Americans.

In addition, January was also the month of President Trump’s impeachment trials. In 2019, the House of Representatives voted to impeach Donald Trump, making him the third president to be impeached in all of American history, but on January 15, the House passed the Articles of Impeachment on to the senate.

The Australian bush fires also continued throughout the month of January, leaving about 47 million acres burned and killing at least 34 people.

Then, on January 26, legendary basketball player, Kobe Bryant and his daughter Gianna were announced as dead in a helicopter crash leaving people across the country devastated.

On February 4, the Iowa caucus for the 2020 election was delayed due to “quality control.” The Iowa caucus is historically significant because it is the first time citizens get to show support for whichever presidential candidate they are behind. The Iowa caucus was extremely significant this year because of events like the impeachment trials and pandemic that made the elections so important.

“The Iowa caucus was one of the more disappointing parts of the election because candidates like Elizabeth Warren and Bernie Sanders didn’t get the support they needed and later had to drop out of the race,” said Aya Benbelkacem (11).

Additionally, One of the most memorable moments of February 2020 was when the movie “Parasite” made history at the Oscars by becoming the first ever foreign film to win the award of Best Picture. Parasite won the most awards out of any other movies at the Oscars and was also the first ever non-english language movie to win Best picture.

The coronavirus also heightened in February, making it a more serious concern. February was also a month of extreme racism towards Asians in light of the pandemic despite evidence that the virus was not directly caused by China.

March was perhaps the most influential month of 2020 because it was the first month that COVID-19 was treated as a serious threat. On March 10, Italy became the first country to implement a nationwide lockdown. This act sounded the alarms for countries world wide, including the US. Then, only one day later of March 11, the World Health Organization named the virus as a worldwide pandemic., and on March 13, President Trump names COVID-19 as a national emergency and from then on schools and businesses across the country go into lockdown mode.

“When we first went into lockdown in March, most people were okay with it because it just felt temporary and we didn’t think it would go on for so long,” said Ashley Raugust (10).

The beginning of the lockdown greatly impacted the economy and stock market. This effect created an economic recession and sparked fears nationally about another depression.

The 2020 summer olympics were postponed until 2021 on March 24, once again highlighting the seriousness of the pandemic.

On April 2, only about three months since the first reported case, the total number of Coronavirus cases globally, surpassed one million. At the time there were approximately 51,000 people dead and 208,000 people that had recovered.

One of the first signs of hope from the pandemic was on April 7 when China lifted the Wuhan city-wide lockdown after 76 days. Later, however, on April 9, the state of New York had the highest number of cases out of anywhere in the world.

In addition because of fears surrounding the economy, the US government officially started issuing $1000 stimulus checks to American households. Many people saw these checks as socialist were against them.

Aside from continued increases in COVID-19 cases, May was a very impactful month. On May 7, two men were arrested for the murder of Ahmaud Arbery. Arbery was killed by two white supremecists while he was jogging through his neighborhood unarmed. A video of his death went viral on social media and sparked civil outrage that eventually resulted in the arrests of Gregory and Travis McMicheal. Outrage grew on May 25, when George Floyd was murdered by police for a false accusation of forgery. Floyd was handcuffed and held down by white police officer Derek Chauvin. A video of his death also went viral and resulted in immediate protests that went into June.

“The death of George Floyd was, in my opinion, the single most impactful event of 2020 because of the protests and civil action that followed it,” said Sierra Foutz (11).

June was the start of the nationwide BLM and civil rights protests beginning in Minneapolis, where George Floyd was murdered. Protests started off destructive, but as they went on became more peaceful and more persistent and incredibly effective in propelling discussions about the systematic racism this country holds.

“The BLM movement is a continuation of the Civil Rights Movement in the 60s… the movement makes people confront the fact white privilege exists and it makes them confront the negative things we as a society have done to continue this violent racism that has lasted for so long,” said Aya Benbelkacem (11). The reason why the BLM protests were so significant is because they brought up discussions that have never been brought up before and this made things uncomfortable.

“None of what we consider as ‘uncomfortable’ comes close to amounting to the racism that people of color have to go through everyday,” said Benbelkacem.

Protests and continuing coronavirus struggles continued throughout the month of July, however they were much milder than in previous months. Most businesses were partially or fully operational.

In addition, on July 2 controversy arounf the Jeffery Epstein case spiked when Ghislaine Maxwell, Epstein’s spouse, was arrested with the charges of sex trafficing. Following the arrest of Maxwell, President Trump sparked outrage when he said “I wish her well…” despite the charges against her.

August was one of the more energetic months of 2020. Only four days after its start a massive explosion at a Beirut port effectively killed at least 190 people and injured thousands more. The explosion was accidental and was caused by the detonation of nearly 2,750 tons of ammonium nitrate.

The month was also filled with catastrophic wildfires ranging from Colorado to California to Washington state.The fires burnt millions of acres of land and displaced hundreds of thousands of people in those areas.

In better news, schools across the country reopened with modified regulations and scheduling due to COVID-19.

August 11 made history when Joe Biden chose Kamala Harris as his vice presidential nominee, making her the first ever woman of color to be a major party’s presidential running mate. “[Harris’ nomination] shows that as much as there is room to grow, I do think we’ve come a long way,” said Caitlyn Voyles (11).

September was a largely influential month for politics. On September 18, Supreme Court Justice Ruth Baeder Ginsburg died at the age of 87. Being just the second ever woman on the Supreme court, her passing greatly impacted people. Amy Coney Barrett was nominated to take her place despite it being an election year. Barrett’s confirmation resulted in extreme controversy due to her lack of experience and polar opposite political beliefs for RBG.

Perhaps the most ironic thing to occur all year was on October 2, when Donald Trump announced publicly on his twitter that he and first lady Melania Trump were in the hospital being treated with COVID-19. The two were hospitalized for three days before returning to the White House.

In news of popular culture, the video game “Among Us” surged in popularity, making it the most widely played game of 2020.

“Among Us is probably my favorite game at the moment because there’s so many possibilities about what can happen and it’s so easy to play with friends,” said Ulises Gonzalez (10).

November 3 marked the official election day of 2020 and perhaps the single most controversial day of the year. Many people around the country feared the civil unrest that might have followed the election. Both Republicans and Democrats had made threats of riots before and after the election, making November 3 a nerve-wracking day for America. Despite the official election date, all votes were not counted until nearly a week after November 3. It wasn’t until November 7 that Joe Biden was declared the 46th president of the United States, receiving the most votes out of any other presidential candidate in history and making Kamala Harris the first ever female and non-white vice president.

“The election results showed a lot about our country. I wish that there weren’t so many people who voted for Trump, but Biden’s victory still showed that America wants to progress,” said Aya Benbelkacem (11).

As the year comes to an end, there’s a lot for people to reflect on going into 2021. Though vaccines are starting to be distributed, there are still a lot of fears surrounding the coronavirus pandemic.

“People have their expectations really high for 2021 because of how [bad] 2020 was, but I think it’s important that we learn from this year and continue to wear masks and take safety precautions,” said Sierra Foutz (11).

The year is finally coming to an end, but that doesn’t necessarily mean all of it’s problems are over. As we head into the new year, now is the time to reflect.